The top leader of outlawed Communist Party of India-Maoist, who was facing trial in several cases including murder and sabotage, was released late Tuesday after he was granted bail by courts in five cases.

The 66-year-old, who was arrested in Delhi in 2009, later left for his hometown Mumbai.

Ghandy was brought to the jail here in April this year in connection with eight cases but was acquitted in three of them.

Arrested in Delhi in 2009 when he was trying to set up a network in the national capital, Ghandy was charged under the Explosive Substances Act, Unlawful Activities (Prevention) Act and Indian Penal Code.

He was initially lodged in Cherlapally central jail in Hyderabad for three months in connection with the assassination of former Congress legislator C. Narsi Reddy in August 2005.

Ghandy was also facing trial in the murder of former Andhra Pradesh Assembly speaker D. Sripada Rao in 1999 and for a conspiracy to kill the personnel of anti-Maoist force Greyhounds and police in Gunurkayi village of Visakhapatnam district in 2008.

According to police, the former member of the Central Committee of Maoist outfit was allegedly operating with several alias including Azad, Aravind, Kamal and Saleem and had links with revolutionary groups in various countries including Philippines, Peru and Nepal.

In 2015, the ailing Maoist leader went on a hunger strike in Tihar Jail to protest his repeated transfer in jail wards.

He was acquitted by Delhi’s Patiala House Court last year but he remained in prison due to other cases pending against him.

Ghandy, who studied in prestigious Doon School in Dehradun and Elphinstone College, Mumbai, was reportedly elected to the Maoist Politburo in 2007 and went underground after the merger of the Communist Party of India-Marxist-Leninist People’s War Group and the Maoist Communist Centre of India in 2004.

(This story has not been edited by Business Standard staff and is auto-generated from a syndicated feed.) 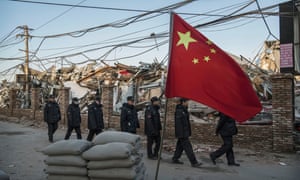 Demonstrators condemn evictions and demolitions carried out by authorities which have seen thousands lose their homes.

Hundreds of protesters have taken to the streets of the Chinese capital to pillory Beijing’s crackdown on migrant communities with chants of “violent evictions violate human rights”.

Demonstrators gathered on the streets of Feijia village, about 12 miles northeast of Tiananmen Square, on Sunday for the small but rare rally condemning the eviction and demolition campaign.

Activists say thousands of migrant workers have been forced from their homes in Beijing’s rundown periphery since late November when authorities intensified efforts to drive “low-end” migrant workers out of the city in the wake of a deadly tenement fire.

Sunday’s protest was not reported in China’s Communist party controlled press but videos and photographs of the event spread online, with human rights campaigners cheering the scenes. Read more on this at: