A MESSAGE FROM THE VICTIMS OF MINING CONTAMINATION: Chronicle of a Death Foretold 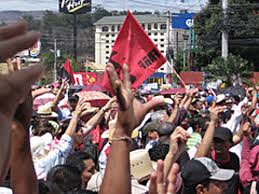 New York
Published Jun 27, 2012 9:25 PM
In cities across the U.S. and Honduras on June 28, a National Day of Action will commemorate three years of resistance to the coup that removed Manuel Zelaya Rosales from the presidency of Honduras. These actions come at a moment when Washington has engineered another coup against a legally elected leader in Paraguay, Fernando Lugo. Lucy Pagoada, delegate to the Honduran Resistance (Front for National Resistance of the People, FNRP) and member of the Libre (Liberty and Refoundation) Party, spoke with Workers World about these events. http://www.workers.org/2012/world/honduras_0705/#at_pco=cfd-1.0